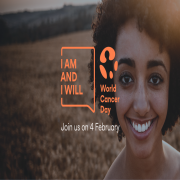 Every year on February 4 the world speaks with one voice to raise awareness of cancer in every corner of the globe – the World Cancer Day is an initiative led by the Union for International Cancer Control (UICC), a cancer-fighting organisation with more than 1,100 members in 170 countries.

“This World Cancer Day, we want people to know that many cancers can be managed and even cured, especially if they’re detected and treated as early as possible. By detecting cancer at its earliest stage, we seize the greatest opportunity to prevent millions of avoidable deaths worldwide,” said Chief Executive Officer, Union for International Cancer Control, Dr Cary Adams in a press release.

Cancer has a significant impact on humanity as the second leading cause of death worldwide, accounting for about 1 in 6 deaths according to the World Health Organization (WHO). Cancer-related deaths amounted to 9.6 million in 2018 and these are the types of cancer that led to the greatest number of death:

By and large, patients diagnosed with an early-stage cancer have a dramatically higher chance of survival beyond five years after diagnosis compared to those diagnosed at a later stage when the tumour has spread to other tissues and therefore it’s harder to treat.

In the US, for instance, only 15 percent of women diagnosed with advanced cervical cancer are alive five years after diagnosis, while the five-year survival rate for women diagnosed when cervical cancer has not spread skyrockets to 93 per cent, according to the American Cancer Society. Similar patterns are observed even in countries of lower income level.

Early cancer screening and diagnosis remain some of the most effective ways to make a dent in cancer mortality, however, too many cancers are still being diagnosed late.

Feeling of shame and fear, poor health awareness and gender norms are some strong barriers preventing many people from seeking treatment early, according to the UICC.

Masculine gender norms, for example, lead some men to avoid seeking medical help even when potential cancer symptoms appear. In those cases, encouragement and support from spouses and family members are key factors pushing patients to do a check-up.

While a report in the UK found out that one in four people do not seek medical care due to fear of a cancer diagnosis.

To overcome these barriers, increased awareness of the benefits of early screening and diagnosis is crucial.

I Am And I Will

Under the campaign theme I am and I will, World Cancer Day hopes to inspire individuals, health organisations and governments to take action against cancer.

“Cancer thrives on late presentation of the disease. The delay allows it to spread and cause damage totally unchallenged. That is why, on this World Cancer Day, I urge you all to educate yourselves with the signs and symptoms of cancer and to not be afraid to seek help immediately. Equally, I urge governments to prioritise and systemise early detection and screening programmes to allow for better access and to give all a fighting chance to beat cancer,” said Princess Dina Mired of Jordan, President of the UICC, in a press release.

From dedicating a miniscule minute to taking time to be involved in a cancer awareness event, these are some ways to join in the global movement:

- Start a conversation about cancer with your family, friends and colleagues

- Make a donation towards UICC to support their work

- Advocate for action with your community leaders or government

Take action today towards your future without cancer.

Laurent Bleu: Giving back to the community in a global pandemic

The COVID-19 pandemic is an ongoing pandemic that has since caused one of the largest global, social and economic disruptions in history. To date, this virus has infected 174 million people and claimed the lives of 3.7 million people. One measure practised worldwide to combat the rising number of COVID-19 cases is mass-testing on the population. The fundamental reason for mass-testing is to ensure that those who are positive are immediately isolated and quarantined to prevent further transmission of the virus.

CANCER OF THE OESOPHAGUS – A bitter pill to swallow

Cancer of the food pipe/gullet (oesophagus) is the 8th most common cancer and the 6th most common cause of cancer-related deaths worldwide. Most of us will experience a few episodes of heartburn or the sensation of bitter taste/acid in our mouth on a monthly basis and this is a common aspect of modern life causing no concern. It may be triggered by the food we eat, poor eating habits, stresses in life, medication, being overweight or habits such as smoking and alcohol. Most of us would take a short trip to the local pharmacy for an acid remedy or make an appointment with the local family doctor for treatment. However, when it becomes intractable and constant, it becomes a worry as this may be the first sign of oesophageal cancer. When cancer develops and enlarges, there will be a sensation of food begin stuck at the throat or in the centre of the chest. Eventually, it may lead to the inability to swallow anything (dysphagia) as cancer grows and the opening of the food pipe becomes completely blocked. Swallowing of water, food or pills becomes impossible. It may also present with vomiting blood or unintentional weight loss.

‘’Gastric pain’’ can be a sign of gallstone disease

Did you know that what many people think of as ‘gastric pain’ may be a sign of gallstone disease instead? Many patients don’t realise that abdominal pain and vomiting are also symptoms of gallstone disease. Typically, 80% of the population with gallstones do not have any symptoms. However, gallstones can cause problems. This is what you need to know.

Fat Freeze Treatment: Does It Work & Is the Procedure Safe?

Not everyone can lose weight or burn fats that easily, which is why some people would look at other options such as cosmetics treatments and other non-invasive treatments to help them slim down. For this reason, fat freezing treatment is growing in popularity as more people are turning to the procedure to freeze away fat. But how effective are the fat freeze treatments and do they work?