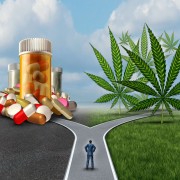 A country known for harsh penalties for illegal drugs, Thailand is set to become the first nation in Southeast Asia to allow the use of marijuana for medical purposes.

By a vote of 166 to 0, the military-appointed National Legislative Assembly approved legislation in late December that would allow the use of cannabis under medical supervision. The measure is expected to take effect sometime in 2019.

Marijuana can be useful in treating a wide range of conditions, including glaucoma, epilepsy, chronic pain, and the side effects of chemotherapy.

Details of how medical marijuana will be administered in Thailand remain unclear, but only people authorised by the government will be allowed to plant or possess it. Medical users will be required to have a prescription or medical marijuana identification card.

Uncertainty over when the law would go into effect was heightened on January 28 when the government “suspended the licensing of commercial marijuana-based products for medical use due to concerns that foreign pharmaceutical companies were trying to monopolise the market,” according to Weedmaps, a cannabis business and education news site.

According to Avery, Britain's GW Pharmaceuticals and Japan's Otsuka Pharmaceutical have formally filed patents to produce medical marijuana in the country, but their applications have not gone through yet.

He added that the move to put the patent applications on hold until the new law comes into force might be intended to make it easier for more Thais to cultivate and consume medical marijuana. Thai civil society groups and researchers fear that domination by foreign firms could make it harder for Thai patients to get access to medicines and for Thai researchers to get marijuana extracts.

“This NCPO order is beneficial for Thai people across the country because it prevents a monopolistic contract,” said Somchai Sawangkarn, a member of parliament responsible for amending the Narcotic Act, to Reuters.

Despite the legal complications, other countries in the region have also taken an interest in medical marijuana.

In Malaysia, the Muslim Consumers Association has urged authorities to accept the use of imported cannabis-based products for medical purposes. According to its chief activist, Nadzim Johan, many clinical studies on the issue have already been conducted both in Malaysia and abroad.

“We have to look into how far the use of the products can be controlled, and at the same time, carry out more clinical research on the plant and how it can be used as an alternative medicine.

“It would be a huge loss if we refused to make optimal use of the plant when it has proven effective in the treatment of various illnesses, including cancer and nerve diseases,” he told Bernama. “We’re aware that the cost of treatment, especially for cancer, is very high and a great burden. So if there’s an alternative, it may help patients.”

According to FMT News, Malaysia’s Deputy Health Minister Dr Lee Boon Chye recently said that the government would only consider cannabis-based products for medical purposes if there was strong evidence of its efficacy and safety. He said pharmaceutical companies and others who wished to import the drug would have to show proof that it was safe and effective.

WHO predicts doubling of annual cancer cases by year 2034

What you need to know about 9 most common cancers

Cancer is the second leading cause of death globally, and is responsible for an estimated 9.6 million deaths in 2018. Globally, about 1 in 6 deaths are caused by cancer.

What is prostate cancer?